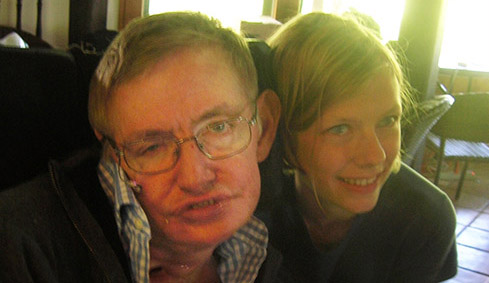 By Bernard Whiting, Professor of Physics, University of Florida

With the death of Stephen Hawking early on March 14th, 2018, the world lost a distinguished scientist and a great mind. Despite failing health in his last days, he was able to die peacefully at home surrounded by his family. By the outpouring that has occurred from around the world since then, it is evident that the inspiration he has been a source of for so many will live on indefinitely. 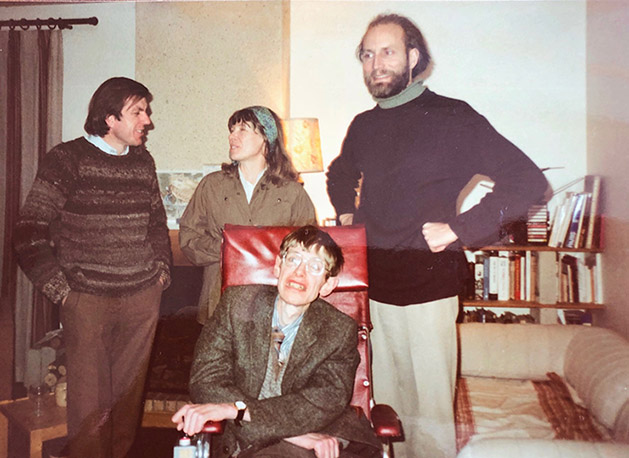 Photo: Stephen Hawking with Bernard Whiting (far left) at the home of Brandon and Lucette (nee Defrise) Carter in Sevres, France in 1984.

I was in Cambridge from 1977 to 1983, and continued to assist Stephen at meetings until at least 1985. I traveled with him extensively during that time to interpret his speech for others, and to deliver his talks with him. He once told me that his big realization that black holes could evaporate happened one night as he was being helped into bed. He sat on the edge of the bed for a long time, working the details through in his mind, before he finally turned in for the night. Although I personally carried out calculations on quantum fields in curved spacetimes with his graduate student, Mike Fawcett, so we could understand more about the black hole evaporation process, I was never present when he had one of these big discovery moments (that one occurred before my time). However, I was nearby when he was working through his ideas on spacetime foam, the path integral approach to quantum gravity, the boundary conditions for the universe, and his analysis of the cosmological constant. In fact, I gave a talk on these in his place at the Heisenberg Symposium in Munich during July, 1981, and represented him on a discussion panel there because Stephen was at home in Cambridge, too sick to make the trip.

Strangely, his fateful tracheotomy in 1985 while suffering from pneumonia, made him more accessible to the world at large, and the synthetic voice he had used since then became his trademark. But for those of us who were honored to know him well before that, we lost the spontaneity of his humor and the villainous intonation he could put into his weak voice. With Stephen’s death, we have also now lost a remarkable colleague, and a close friend who has spent his whole academic lifetime being motivated to understand better the implications of the singularities which arise in Einstein’s general theory of relativity.