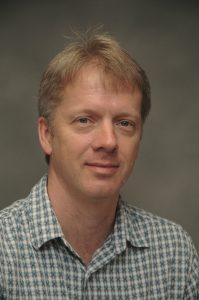 Every now and then, UF physics professor and Associate Chair Dr. Stephen Hagen likes to add another skill set to his repertoire. He finds that for each new mastery attained he broadens his ability to understand the world around him, whether from a scientific or a societal perspective. You could think of these new skills as being like a human version of tree rings – each one representing personal growth and helping to strengthen the individual as a whole.

Born in Zimbabwe (which was Southern Rhodesia at that time), Dr. Hagen grew up in England, then central New Jersey. He attended Wesleyan University, in Connecticut, as an undergraduate, where his first physics class got him hooked on the science. In the midst of Dr. Hagen’s grad school years at Princeton, the recent discovery of high critical-temperature superconductors led to a special session at the American Physical Society’s March 1987 meeting, subsequently dubbed “The Woodstock of Physics,” with 51 presentations on superconductivity that, for the most part, reflected work that had not yet been published. As Dr.  Hagen, who attended the event, recalls, “it was a very exciting time to be in physics, a lot of energy and enthusiasm – much as the discovery of gravitational waves is doing for the science now.” The practical result was that Dr. Hagen’s thesis advisor said he should drop everything else and start working on superconductors. So that’s what he did, resulting in his dissertation in 1989 on “Transport studies on single-crystal YBa2Cu3O7-x.”

After a postdoc studying superconductors at the University of Maryland, Dr. Hagen decided he wanted to go into biological physics (“something more connected to the world”), so he applied for a position at the National Institutes of Health (NIH). “If you were a physicist, they wanted you – they figured you were smart.” Part of the challenge at NIH was learning the jargon of a new field. After several years, he was ready to add yet another skillset, this time in politics. He became an AIP Congressional Science Fellow with the U.S. Senate Banking Committee. He worked on the Y2K problem, when bankers were terrified the whole economy would collapse. Another issue was increasing consumer protections for debit card users. He learned that progress did not always require passing bills. Sometimes just asking questions in committee could make things happen. After another stint at NIH, he landed a tenure-track position in physics at the University of Florida. “UF had a lot of resources for biology on campus, including the vet and med schools.”

Dr. Hagen’s recent research emphasis has been on the physics behind “quorum sensing” – the ability of a biological system to alter its behavior based on the concentration of its individual members. For example, in the case of some species of grasshoppers, the rate at which they bump into each other initiates the physical and behavioral transformations that morph them into the swarming locusts of biblical-plague fame. Many disease-causing bacteria emit and detect chemical signals to determine when their local concentrations are high enough to go on the attack or to form a biofilm for defense.  Famous examples include Vibrio cholerae which causes cholera, Pseudomonas aeruginosa which causes lung infections in cystic fibrosis patients, and many types of streptococcus. All use quorum signaling to coordinate pathogenic behavior. 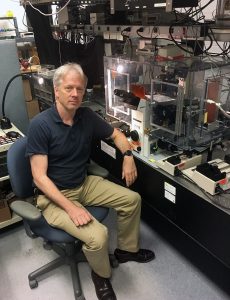 A focus of Dr. Hagen’s lab has been the complex response of the bioluminescent bacteria that inhabit the light-producing organ of the Hawaiian bobtail squid Euprymna scolopes. On moonlit nights, these squid use the diffuse light from the bacteria to erase their shadows from the sandy bottom – sort of like going into stealth mode to avoid predators. The signaling going on between the bacteria to determine when to luminesce is quite complex, with multiple chemicals being emitted and detected.  Complicated quorum signaling networks like these are capable of oscillatory and switching responses reminiscent of traditional electronic circuits. While a biologist might look at this in terms of what genes are involved or what chemicals, the physicist is looking at the dynamics of the system: How does the biological “machine” respond to various input signals; how does it handle poor signal to noise ratios; how does it exploit probability or chance at the molecular level to optimize its decision-making? What we learn from these biological systems can help inform the design of future technologies, such as nanobots, that will rely upon many individual components to achieve a common goal.

Dr. Hagen has some suggestions for students looking to distinguish themselves from the crowd. First, look for opportunities to learn useful research skills.  Instead of learning another video game during semester break, consider learning a programming language instead. The point is that every new skill you learn can provide you with additional choices or insights in the future on how to tackle problems that may arise in your academic or research career. Second, get hands-on experience doing research though the Research Experience for Undergraduates program, or a senior project, or even by volunteering. Just remember that your mission is to bring value to the lab or research group you end up working with. As Dr. Hagen notes, “It’s not about having a passive experience.  Your goal is to make a positive impact on a useful project, and probably also to figure out how you can do that. No research group can afford to give you a lot of close supervision. Consider that music faculty often charge students $50/hour for private lessons!”  Above all, don’t stop learning and growing throughout your life. Humans may not exhibit growth rings like a tree, but the layers of experience we add can make us more resilient to whatever the future may hold.