On Friday, December 7, the physics department hosted its annual poster session event and recognition of the 2018 graduate student award recipients. Congratulations to all award recipients (listed below).

“Prasanth Shyamsundar is the most dedicated TA I have ever had the pleasure of working with.  I have had the opportunity to work closely with Prasanth in his capacity as teaching assistant for PHY2053 for 3 years, since Fall 2015.  Prasanth is highly invested in improving the learning experience and providing students with a personalized experience in our course, despite the overwhelming enrollment numbers.  In PHY2053 we do not return exams or scratch paper to students; in the past the sheer numbers of students involved has made this impossible. Prasanth suggested, developed, and implemented a program that uses optical recognition to separate a scan of exams into individual files by student, and to email the student with the scan of their exam and work.  Prasanth has also taken upon himself to act as mentor to our new TAs, especially when it comes to facilitating learning: suggesting best practices to improve student participation in recitation, and how to best write quiz problems that will enhance learning and discourage rote memorization.  In this course we have two recitations per week.  Students take a quiz in the first recitation and the second recitation is purely for learning/problem solving.  By the end of the third week of classes we usually see a large drop in attendance for the second recitation in the week.  As a testament to the students viewing Prasanth’s teaching style and abilities as useful, his recitation sections are full through the end of the semester.” – Professor Heather Ray

“It has been my pleasure to work with Siddhartha (Sid) Abhinav over many semesters, from the time he arrived in the physics department in Fall 2012, to the present.  Sid stood out in his clear vision of how to approach teaching physics labs and how to implement that approach.  He prefers the one-on-one nature of lab teaching and its emphasis on the experimental basis of physics principles.  He is also informed by one-on-one discussions with Dr. Sandy Fisher, an outstanding local education researcher we have invited in past semesters to present teaching strategies to our graduate teaching assistants.  These discussions and books on teaching that Sid has read, taught him about different student learning styles and how he can tailor his instruction to individual students to help them achieve their learning goals.  His excellent course evaluations indicate that students appreciate his approach.  Sid Abhinav is a very talented instructor, benefitting all of the students lucky enough to be placed in his sections.  He has a caring and multifaceted teaching style that furthers our department’s goals of improving physics literacy in a student-friendly environment.  Recognition for his outstanding laboratory teaching is very well deserved.” – Robert DeSerio, Undergraduate Lab Coordinator 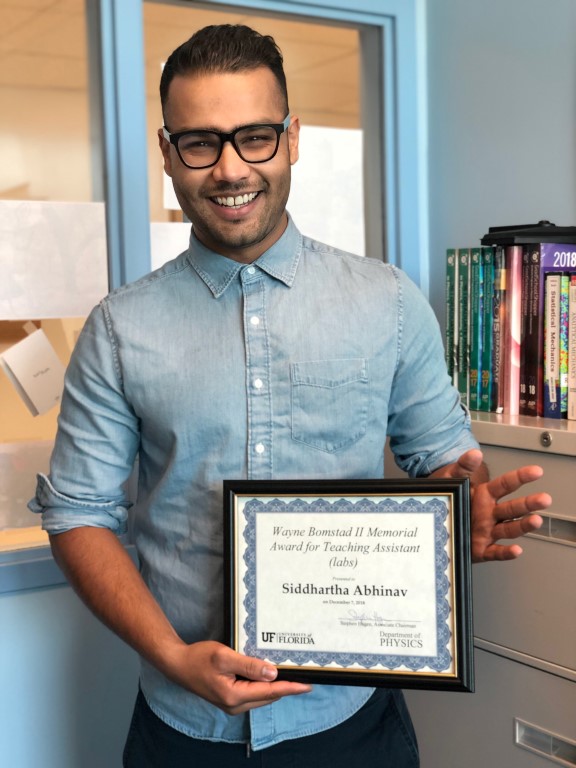 “Colin is a senior graduate student in my group who is now conducting the last run of his experiment.  For the past 4 years, he has accomplished so much.  He developed micro-electro-mechanical system (MEMS) fabrication procedures and fabricated MEMS devices and arrays.  Since I am not trained in this area, everything had to be done in collaboration with researchers at Sandia Natinal Laboratory, Oak Ridge National Laboratory, and UF NIMET.  He initiated the contacts and lead the effort to reach where we are.  He developed a simpler measurement scheme to test those devices and conducted experiments in superfluid 4He.  He has produced and is producing so much data which have never been reported in this field.  We are in the process of understanding the nonlinear behavior of the MEMS oscillator in superfluid 4He interacting with vortices in the system.  I believe Colin’s work will open up a new way of investigating quantum turbulence and the nature of vortices.  He has authored 7 papers so far, but I expect a few more high impact papers in the near future.   Colin has an enormous amount of intellectual curiosity.  His consistent attendance to CMP seminars and colloquia and questions posed often prove this.   He is also deeply involved in all projects in my group that carried out by other graduate students.   He is a deep thinker. He has a wide range of knowledge and interest in physics and related subjects.  He is highly skilled experimentalist who always thinks through the process to improve techniques and analyses.  He is simply in the top three experimental students that I have worked with here at UF, Stanford, and Northwestern.” – Advisor, Professor Yoonseok Lee

“For his outstanding work on the black hole spectroscopy. Brendan developed a novel model-independent method based on a strong correlation between the spectral content of the black hole merger signal and the following excitation of the post-merger QNM modes. He designed the waveform transform, which allows us to synchronize and coherently add two or more BH-BH signals to reveal the enhanced QNM modes not visible for the individual events. Brendan also produced a practical implementation of the method that has been tested on a set of numerical relativity waveforms. For the first time, he demonstrated the efficient synchronization of the merger signals and enhancement of their combined QNM spectrum. Brendan presented his results to the LIGO collaboration. He also finished a paper describing the method which will be sent for publication in PRD after the LIGO review. The results of this novel work will be used in the next LIGO observing run with the goal of the first measurement of the BH spectrum. This excellent research work is already completed part of his thesis which topic is “the detection and study of the intermediate mass black holes.” This is another very exciting research project Brendan will be leading during the next one year observation run (O3) by LIGO starting in February 2019. Brendan plans to complete the analysis of the O3 data and graduate in spring 2021.” – Advisor, Professor Sergei Klimenko

“Sankha is one of the most gifted students I have had.  I first got to know him when he took the graduate level course on quantum mechanics which I taught during the 2013-14 academic year.   He and another student were way ahead of everyone else in the class.  I was very pleased that both asked me to become their research advisor.  Sankha in particular has been highly motivated and unusually productive in research.  Sankha has written three papers published or soon to be published in Phys. Rev. D    One of the papers is based on his undergraduate research and has Sankha as sole author.  Sankha is talented, highly motivated and thorough.  He is friendly, polite and helpful to others.   He has thought in depth about the questions of interest to our research group and this invariably shows during discussions in our research group meetings.  I have great hopes and expectations for his future as a physicist, and strongly recommend him.” – Advisor, Professor Pierre Sikivie