[Note: In a departure from the usual format of our Physics Profiles, the author, Don Mock (BS’ 76; MS ’78), has been asked to write about his own career path.] 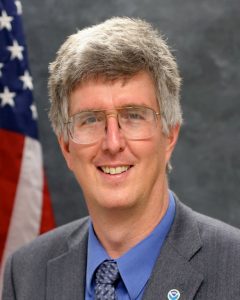 It wasn’t supposed to turn out this way. When I got married to fellow undergraduate physics major, Anita Colin, at the bottom of the Devil’s Millhopper sinkhole back in 1976, we both had thoughts of becoming physics professors one day. But that didn’t happen. Here is the story of what happened instead.

After graduating from high school in Miami, I came to the University of Florida because of the beautiful campus and diversity of its academic offerings. After a short stint as an electrical engineering major, I switched to physics because I wanted to learn all the secrets as to why the world is the way it is, such as why the sky is blue, or why a spinning top precesses. I also joined a fraternity to get some social experience and try to break out of my science-nerd image. After three years, I had become president of the local chapter of the Society of Physics Students, rush chairman of my fraternity, and was well on my way to that hypothetical physics professorship.

When I graduated with a BS with high honors, it was time for the next big step – going to graduate school. Since my now wife, Anita, still had two years to go and was on a full National Merit Scholarship, it made sense that I stay in Gainesville a while longer. Thankfully, Professor Henri Van Rinsvelt offered me a graduate research assistantship performing Proton-Induced Xray Emission (PIXE) analysis using the department’s 4 MeV Van de Graaff particle accelerator. By the time I received my MS, and Anita her BS, in 1978, some of our academic interests had changed. She had switched to zoology and I had become interested in atmospheric sciences. We applied for doctoral programs at universities that offered both of these programs.

We spent the next seven years at the University of Washington in Seattle, at the farthest corner of the country from Florida and surely the opposite in terms of terrain and climate as well. The zoology and atmospheric science departments at UW are both one of the best in the US. The coursework was quite rigorous and, as a major research university, the emphasis was on research, research, and more research. Here’s where things didn’t go as planned. I enjoyed learning about how the weather works, i.e., what was already known, but I didn’t have a researcher’s instinct for exploring what was as yet unknown. I also found the new-fangled computer workstations and PCs becoming commercially available just then to be more interesting to work on than my own research. But I did gain a lot of valuable experience in those years helping other graduate students with their computer problems.  At the end of seven years, Anita got her PhD and I left with an ABD (all-but-dissertation) PhD – meaning I didn’t finish my research. Now what was I going to do?

We moved to LA where Anita began a postdoc at USC.  Through my contacts at UW, I was able to get a position on the technical staff at NASA’s Jet Propulsion Laboratory.  I worked for the physical oceanography group as a Fortran scientific programmer, something I found I enjoyed and was good at. Over the next few years I learned all about the Unix scientific workstations I was using, enough so that I started making recommendations on what new computers the group should buy and how to run them. I eventually became the group’s systems administrator.

By 1989, we had started a family and knew we didn’t want to raise our children in LA.  We had been to Boulder, Colorado, and liked it, so I started applying for jobs there.  After half a year of searching, I was hired to be the systems administrator for NOAA’s Climate Diagnostics Center. I found that my background in physics and atmospheric sciences enabled me to configure the computer systems to better serve the needs of the scientists. On the personal side, I became involved in local politics, serving on the city’s Parks Board, then on the City Council, and finally as Boulder’s Deputy Mayor. In 2003, I was promoted to become the Executive Director of NOAA’s Boulder Laboratories, where over 1000 scientists and research affiliates work on improving our understanding of weather and climate. My job was not to direct the science, but to foster an environment where the scientists could best accomplish their work – in other words, I put out lots of bureaucratic fires. I believe I was selected for this position due to the rather unusual combination of my familiarity with the science, technology, and politics of relevance to the organization. After ten years of “fire” fighting, at age 58, I retired.

So we didn’t become physicists, but we were pretty pleased with the careers we had. (Anita taught biology classes at the local community college.)  I believe that our solid background in physics made us more attractive to prospective graduate schools and employers. Certainly, the problem-solving skills we both developed as physics majors have lasted us a lifetime. When we started our journey back in 1973, the University of Florida and, specifically, the UF physics department, was one of the most warm, friendly, and supportive environments that I have encountered over the course of my career. We have especially fond memories of the physics department’s annual spring picnics which were held at Professor Eugene Dunnam’s Gator Slide Farm near Micanopy. We now spend our time volunteering, split between Colorado and Florida. Each winter, I return to Gainesville and to the department to write these profiles. Yes, it wasn’t supposed to turn out this way, but that’s OK with us.