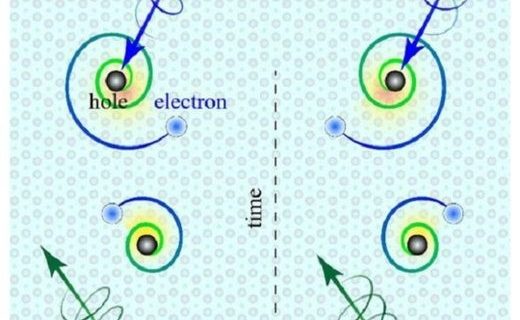 A joint team from Rutgers, UF Physics (graduate student Adamya Goyal and Professor Dmitrii Maslov), and University of North Carolina (Professor Alex Kemper, UF Physics alum), discovered a new kind of composed particles—“chiral excitons”—on the surface of a three-dimensional topological insulator of the bismuth selenide family.  A chiral exciton is formed by a massless (Dirac) electron and a massive hole bound together by the Coulomb force. The topological nature of the surface state results in locking the spins of the constituents to their momenta at a 90 degree angle. Light is emitted due to recombination of electrons and holes spinning around each other with  total angular momentum equal to unity (in units of the Planck constant).  The chiral exciton is observed as a strong photoluminescence signal that preserves polarization of incoming light.  The study is published in Proceedings of the National Academy of Sciences  and has been featured on a number of science news sites.