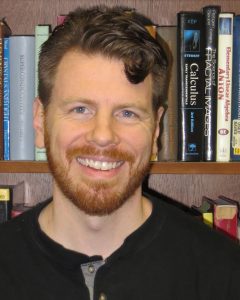 Dr. James Hamlin, the UF Physics Department’s most recent professor to receive tenure, likes high pressure. Not the stress-inducing, white-knuckle kind. We’re talking the physics kind. In his laboratory, diamonds are used as miniature anvils to put the squeeze on exotic compounds at pressures such as you might find close to the center of the Earth – more than a million times normal atmospheric pressure at sea level. How compounds will react under these conditions is sometimes hard to predict. Their magnetic properties may turn on or off, or they may become superconducting. The holy grail in this field is to find a material that is superconducting at something close to room temperature, hopefully one that is also non-toxic and can be formed into a wire. With pressure, you can subject a substance to several orders of magnitude more change than by varying its temperature. If the material becomes superconducting at high pressure, then a close relative of that material (say, by substituting one atom for another) may yield a commercially viable superconductor.

Born in Manhattan, the last in a long line of family members involved in the theater scene — his mother was an actress, his father was a stage and production manager — young James sought his own path. He followed a childhood friend into NYC’s Stuyvesant High School, a prestigious math and science magnet school, where he was exposed to physics, digital electronics, and computer science. But as Dr. Hamlin notes: “I was a terrible student because I cut classes that I wasn’t interested in, often to go to the library and read about things like fractals; I barely graduated on time due to skipping gym class a few too many times.” At Washington University in St. Louis, he started out as a computer science major but got hooked on physics after taking a class in quantum theory from a professor who laid out the history of the field as a sort of grand, logical progression that James found fascinating.

As a physics major, James took an optics lab class where he really liked the hands-on work. He even received a fellowship to build “optical tweezers” to manipulate micron-sized particles with lasers. He found his life’s calling after getting a tour of Dr. James S. Schilling’s high-pressure physics lab. He immediately joined the Schilling research group and started performing experiments. As a junior he gave a talk before 400 attendees of an APS March meeting in Seattle on the superconducting properties of magnesium diboride (MgB2). He stayed on with Dr. Schilling after earning his BS and received his doctorate on the superconducting properties of the elements at extreme pressures. For his postdoc, what better place to land than with UCSD’s Dr. M. Brian Maple, who has one of the most well-known, highly-cited synthesis and characterization labs in the country. For James, the work was intense, but rewarding (“six days on, then one day off for body surfing in the nearby Pacific”). In the lab, James specialized in high pressure measurements and also learned how to synthesize new materials.

When it was time to settle down into a permanent position, UF was the logical choice. Of the several universities he considered, “UF had facilities that were practically perfect for what I wanted to do”, says Dr. Hamlin, “including the Microkelvin Lab, the National MagLab, well-staffed machine and electronics shops, and an awesome helium recovery system.” UF also seemed to him to be more friendly, welcoming, and, frankly, better organized during his job interview process. With the department’s start-up money, he outfitted his lab space with the latest and greatest high-pressure equipment and then took it one step further. Using helium gas as the medium to crank up the force exerted by the diamond anvils on the sample, he was able to keep the targeted material in the cryostat through a whole gamut of pressure ranges. Experiments that used to take weeks to finish could now be completed in a single afternoon, allowing Dr. Hamlin and his lab’s students to make high pressure measurements a standard part of sample characterization. Dr. Hamlin is now helping to organize an interdisciplinary collaboration using machine learning to speed up the selection process for testing new materials. The goal, of course, is to eventually find a material that is a superconductor at close to normal environmental conditions.

In his private life, Dr. Hamlin still goes body surfing, once a month at a beach near St. Augustine. He has also taken up caving with the Florida Speleological Society. Caving in the Gainesville area normally involves crawling though twisty little passageways and tight spots through fairly rough limestone – none of the grandeur of a Luray Caverns since the rock in Florida is too young for that. For two years, Dr. Hamlin was the official steward of nearby Warren’s Cave, the largest dry cave in the state with over four miles of mapped routes. One day he was exploring and took a wrong turn on the way out. He found himself in a less traveled portion of the cave, facing a tight squeeze around a big boulder. As he leaned on the boulder, it shifted position! Luckily, his arm or leg was not “pinched” in the process – à la the movie 127 Hours. THAT would have been a type of high pressure Dr. Hamlin could certainly do without. He’ll stick to creating his high pressure in the lab, thank you.