The term ‘Atom Smasher’ has a certain 1950’s allure, evoking a comic-book-like image of a giant hulking machine focusing a fantastically bright beam of energy onto a tiny target. And that’s pretty much the reality, too, but nowadays we call them particle accelerators, cyclotrons, synchrotrons, and colliders. They used to be a common feature of physics departments – the UF physics department once had a three-story tall 4-MeV Van de Graaff accelerator – and they are still necessary for conducting cutting-edge research into the mysteries of the atom. But now they’ve gotten so big and expensive, no one department can afford them anymore. [Note: One eV is the energy acquired by an electron accelerated across a potential difference of one volt. Old-style cathode-ray-tube televisions (aka CRTs) typically operated at ~25 KeV.]

That brings us to CERN’s Large Hadron Collider (LHC) – the biggest and the best of the world’s current atom smashers – buried in a circular ring straddling the border of Switzerland and France. This thing is huge! Along its 17-mile circumference, it generates two counter-rotating beams of protons at an energy of 6.5 TeV that can be steered to collide with each other, thus creating a collision energy of 13 TeV – 13 trillion electron volts – or more than 3 million times more powerful than the physics department’s old Van de Graaff. At four points along the ring, where the beams can be brought into collision, large assemblages of highly sophisticated electronics are used to detect and analyze the resulting debris of elementary particles. These four detectors, each with a different technical approach or scientific emphasis, are known by their acronyms: ALICE, ATLAS, CMS, and LHCb. 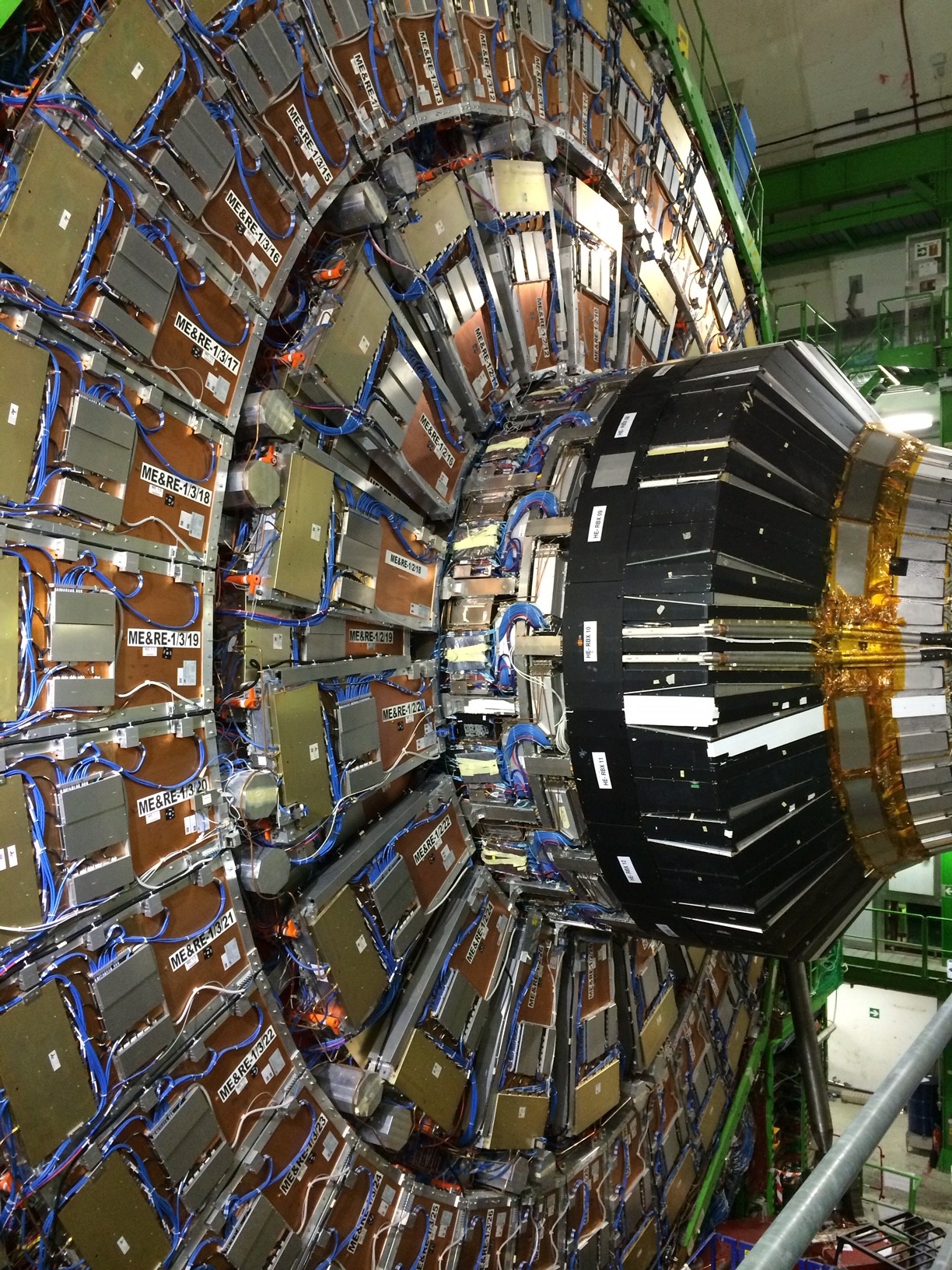 LHC’s Compact Muon Solenoid (CMS) is 68’ long with a diameter of 50’ and weighs nearly 15,000 tons. The LHC’s two counter-rotating proton beams run though the detector’s central axis. The CMS’s 4-tesla superconducting electromagnet is the largest solenoid of its type ever constructed. It can bend the path of muons, which have 207 times the mass of an electron and a mean lifetime of 2.2 microseconds, into a tight enough arc such that their energy and momentum can be accurately measured within the confines of CMS’s vast array of sub-detectors. [For comparison, the LHC’s ATLAS detector is 50% larger, so the CMS is relatively “compact”.] Think of these millions of tiny sub-detectors as pixels in a giant 3D camera that can record the path of the decay products after each set of collisions. At a rate of 40 Terabytes output per second, processing the CMS’s data stream is an important part of the overall system design. Sophisticated software algorithms help separate the data wheat from the chaff, so to speak, and leave only the most significant collisions for scientists to study.

So how does the University of Florida fit in? Key CMS components were designed and constructed 20 years ago by teams led by three UF experimental physicists: Drs. Guenakh Mitselmakher (endcap muon detectors), Andrey Korytov (cathode strip chambers within the endcap muon detectors), and Darin Acosta (track-finder trigger). The physics department’s high-bay area was the scene for the final assembly of several of these components before being shipped off to Geneva. UF theoretical physicists Drs. Richard Field and Pierre Ramond were involved in developing the CMS’ physics program, i.e., what the detector should look for and why. All told, some 40 UF faculty, postdocs, students, and staff are now involved in the CMS project, which is part of a collaboration that has grown to encompass over 200 institutes and 5000 physicists from 50 countries. 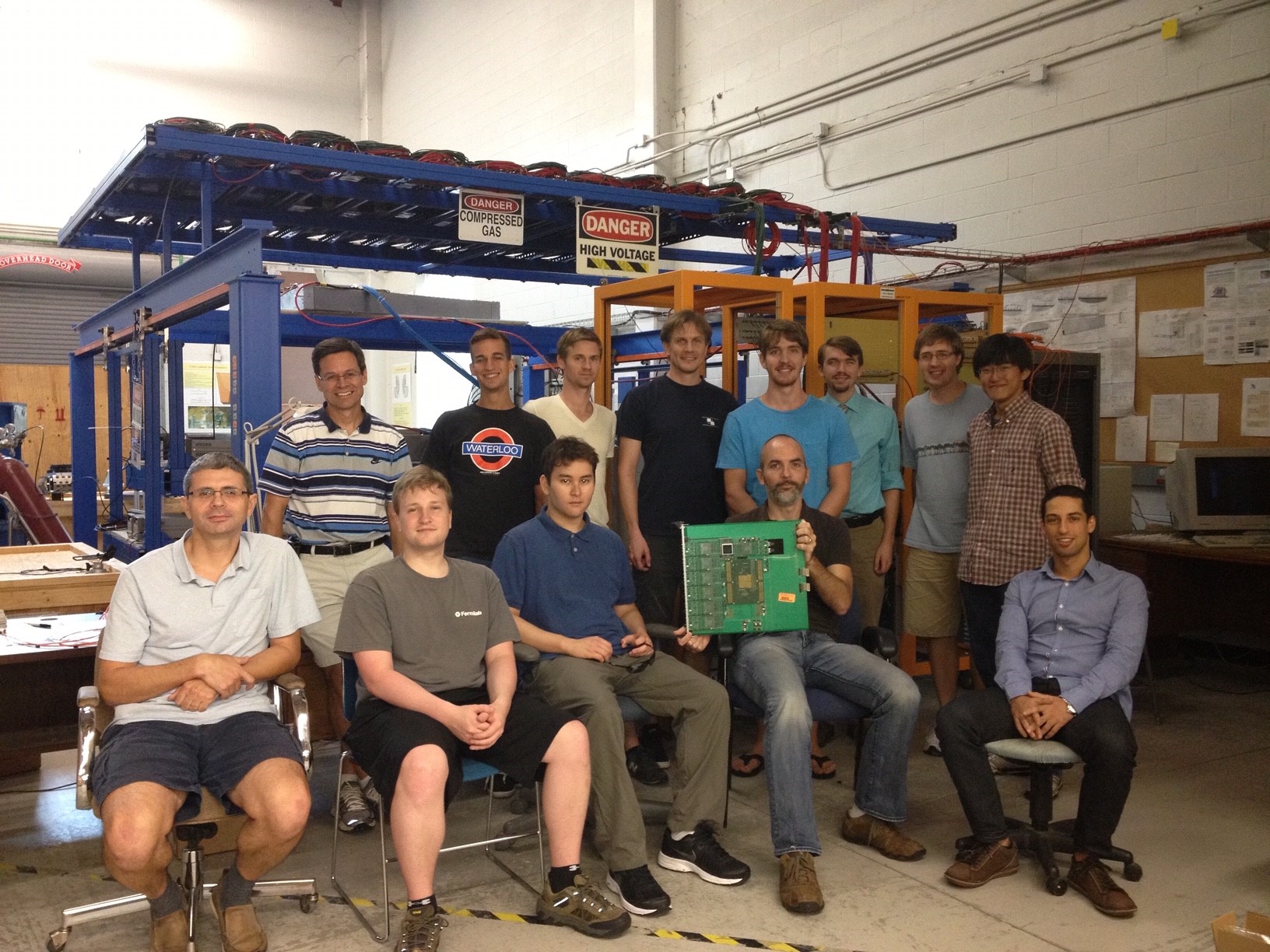 Why is muon detection so important? We’ve known for a while that there is more to matter than just protons, neutrons, and electrons. The Standard Model of particle physics breaks things down further into subatomic particles like gluons, muons, and six types of quarks. For instance, a proton is made up of two “up” quarks and one “down” quark, bound together with gluons. But what the Standard Model couldn’t initially explain is the apparent mass of all these particles. The Higgs field, which must be present throughout the universe, was proposed to explain the perception of mass. And theoretical physicists tell us if there is a Higgs field, then there must be a Higgs boson associated with it. The Higgs boson was predicted to be comparatively massive and very short-lived (245,000 times the mass of an electron with a mean lifetime of 1.5 x 10-22 seconds), making them basically impossible to detect. However, Higgs bosons were also predicted to spontaneously decay into four muons which certainly are detectable.

It takes a lot of energy to create a Higgs boson, and at 13 TeV, that’s exactly what the LHC was meant to provide. In 2012 – success! – the CMS detector, as well as LHC’s ATLAS detector, observed all the right muons in all the right places and thus confirmed the existence of the Higgs boson. So for now the Standard Model lives on, and perhaps can be used as a basis for predicting even more exotic particles, which only the likes of the CMS and similar detectors can confirm. Dark matter, dark energy, and supersymmetry are just a few of the current hot topics. And the UF physics department will be a part of the action at the LHC, providing faculty and students alike with a firsthand opportunity to explore the frontiers of particle physics.