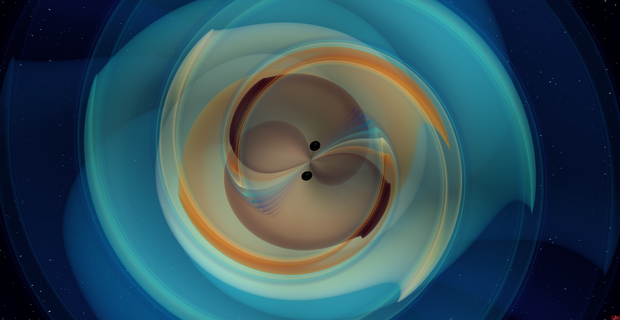 Image: A still image from a numerical simulation of two black holes that inspiral and merge, emitting gravitational waves. The black holes have large and nearly equal masses, with one only 3% more massive than the other. The simulated gravitational wave signal is consistent with the GW190521 observation made by the LIGO and Virgo. (Credit: N. Fischer, H. Pfeiffer, A. Buonanno (Max Planck Institute for Gravitational Physics), Simulating eXtreme Spacetimes (SXS) Collaboration)

The LIGO and Virgo gravitational wave observatories have detected close to a hundred colliding black holes so far. Nonetheless, why these black holes collide in the Universe remains a mystery. In a new publication in Nature Astronomy, University of Florida researchers and collaborators targeted the question of origin by looking for a previously unidentifiable signature: the orbital eccentricity of black holes just prior to collision.

The researchers carried out over 600 numerical simulations that fully take into account Einstein’s General Theory of Relativity, giving them a large sample of templates to compare with the observed gravitational wave data. They also developed a new method to accurately carry out this comparison.

The team then looked at the heaviest black hole detected by LIGO and Virgo so far, in the enigmatic collision GW190521. This special collision was not just heavier than other observed events, but was so heavy that it is difficult to reconcile with how we believe most black holes form: through the gravitational collapse of a large star. The two black holes of GW190521 were also spinning in an unusual way, raising the possibility that they represent a special type of collision.

Coincidentally, GW190521 was detected at the highest significance by a search algorithm developed at the University of Florida, under the leadership of Prof. Sergey Klimenko and Prof. Guenakh Mitselmakher.

The new work showed that GW190521 is best explained by a waveform with unusually high eccentricity. There had been no previous means to identify such high eccentricity in gravitational wave data, making this the first such indication.

“The observation of GW190521 has far-reaching astrophysical implications and marks the beginning of an active research on a new class of black hole collisions.” – said Prof. Klimenko, an author of the study.

Highly eccentric collisions can arise if the black holes meet somewhere in the universe “by chance.” This can happen in the centers of galaxies where extremely large, so-called supermassive black holes reside that can be as heavy as a billion Suns. These supermassive black holes draw smaller black holes closer, creating a place crowded with black holes, where chance encounters can happen frequently. “Our study opened the door to a new class of black hole collisions whose features show that they formed in denser environments,” noted V. Gayathri, a postdoctoral research associate at the University of Florida and the lead author of the study.

“Being able to detect this new fingerprint of chance encounters makes us much better detectives at finding the origin of the colliding black holes LIGO and Virgo observe,” emphasized Prof. Imre Bartos, a corresponding author of the Nature Astronomy article.