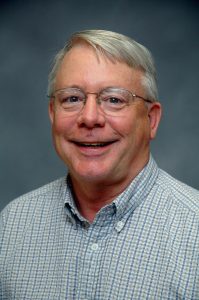 Optical properties of solids: Optical effects in solids occur in the wavelength range from the far infrared through the near ultraviolet. Dr. Tanner’s group studies materials by optical reflectance or transmittance over this entire range. Considerable time and effort has been spent to achieve coverage over a very broad spectral range (more than a factor of 104). The emphasis is on obtaining accurate reflectance values on small, often anisotropic, crystals, with analysis via Kramers-Kronig techniques to estimate the optical conductivity and dielectric function. The materials may be studied at temperatures down to that of liquid helium. Among the topics being studied are high-temperature superconductors, conducting polymers, and low-dimensional organic systems.

Axion search: The axion search is a hypothetical elementary particle which is a candidate for the “dark matter” of the universe. With Pierre Sikivie and Neil Sullivan, Dr. Tanner contributed to the design and construction of a pilot axion detector, which operated at UF for two years. Many of its features are incorporated into a full-scale experiment, the Axion Dark Matter eXperiment (ADMX), at the University of Washington The Florida group contributes to the a high-resolution spectral analysis and in the upgrade with a dilution refrigerator to cool the cavity and SQUID amplifier recently installed in the experiment.

LIGO: The Laser Interferometer Gravitational-wave Observatory (LIGO) project operates 4-km-arm Michelson interferometers at sites in Washington state and Louisiana for detecting gravitational waves from astronomical sources. Dr. Tanner is part of a group at the University of Florida which participates in the LIGO project. UF is responsible for the input optics, one of the most complex parts of the detector, being all of the components between the laser source and the main interferometer. UF bult the input optics of the both original detectors and the Advanced LIGO upgrade, expected to give an 1000x increase in signal rate. The UF group also works on advanced configurations, devices, and materials for a third-generation gravitational-wave detector.