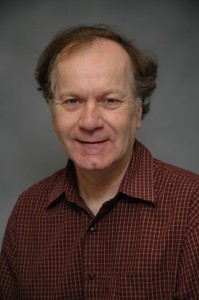 For twenty years, 1988-2008, his research centered around the CLEO collaboration, working at the Cornell Electron Storage Rings. The CLEO detector is particularly good at looking at the decays of B mesons, but his particular specialty has been the spectroscopy and study of charmed particles, in particular baryons containing charmed quarks. Charmed baryons come in many varieties, each being rather like an excitation of a hydrogen atom which we learn about in atomic physics. By finding new states and studying their decays we learn about the way baryons are put together. For many years, CLEO has been in the forefront of this research, and we have discovered around a dozen new states, each one corresponding to a different configuration of quarks. These analyses are performed using the superb computer resources we have at the Department of Physics.

Since the turn-off of CESR, he has redirected his time to working on the CMS detector at CERN, Geneva. In particular, several members of his group are tooled up to do the first searches for SUSY (supersymmetry) when first data is taken. The particular signal they are looking for is two, same-sign, lepton, plus jets, plus missing energy. Very few Standard Model events should have this signature.