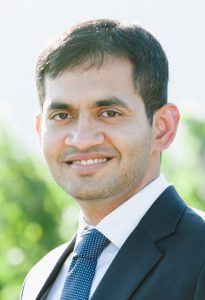 Dr. Dixit studied chemical engineering at the India Institute of Technology (2006) and obtained a PhD in chemical and biomolecular engineering at the Johns Hopkins University (2011). He was a postdoc at the Brookhaven National Lab and Columbia University prior to joining the University of Florida’s Physics Department in January of 2020 as part of a concerted effort to expand the department’s footprint in biological physics. His research has been featured in prestigious journals such as Nature Methods, Nature Microbiology, eLife, Proceedings of the National Academy of Sciences, and Cell Systems. In addition to the MIRA award, Dr. Dixit has also won competitive funding from the UF Research Opportunity Seed Fund to study the role of T cell metabolism in autoimmunity