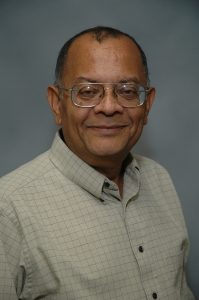 Research interests include:specific properties of materials, such as magnetism and superconductivity. In magnetism, I have worked on the properties of magnetism arising from Nuclear moments. In a metal like Copper, as it is cooled, there are no phase transitions. Copper is nonmagnetic at ordinary temperatures; nor is it superconducting. When Copper is cooled to temperatures as low as 60 nK, that is a tenth of a millionth of a degree from absolute degree, the nuclei of Copper, which have a magnetic moment, undergo a magnetic ordering transition. The unusual feature of this transition, apart from the very low ordering temperature, is that the magnetic precession in this system is at the same energy scale as the energy scale for dissipation. While Copper is antiferromagnetic, Ag is expected to be ferromagnetic at 2 picoK, and Rh, also antiferromagnetic.

Recently, with some collaborators, we have proposed that the phase transition in Potassium doped Barium Bismuthate is novel and unique so far, in being of order four. This proposal is still being studied. There are occasional claims that it is controversial. I like to think that all ideas of some impact are that. It has certainly had impact.